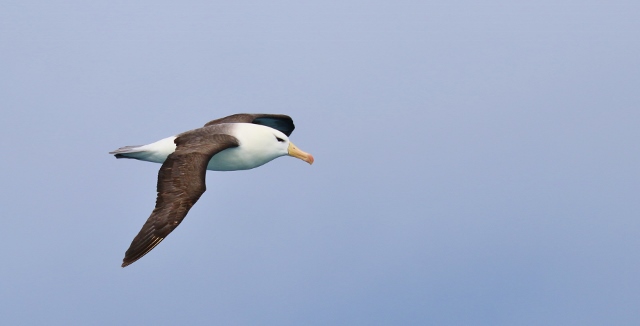 The main aims of the 2019 CUSTARD expedition have been to look at carbon export from the Southern Ocean, to deep water or even the sediments five kilometres down from the sunlit surface waters where phytoplankton grow. As well as being the start of the biological carbon pump, these microscopic algae are also the base of the food web, being eaten by zooplankton (small animals) which are then food for fish, birds and whales.

Being far from land reduces the amount of wildlife around, but there are normally some birds around and we have seen Fin, Minke and Pilot Whales. The birds are largely either young birds, that have several years to travel away from their colonies (some do complete laps of Antarctica as immature birds) or adult albatross between breeding cycles, which are every other year. Whales are clearly free to be where they like, though for many of them that will be further south, closer to the ice.

The area is very rarely visited so there has been considerable uncertainty what is out here. Several species are well outside their mapped range, but that’s almost certainly because people haven’t looked rather than through any change in behaviour. Late in the cruise there were three Juan Fernandez Petrels – the Juan Fernandez Islands are over a thousand miles to our north, and they are mapped as moving north from there to the equator. Increasingly birds are being tracked with GPS or geolocator tags (the latter record time and light so that day length and timing allow latitude and longitude to be calculated). This is really useful but still hard for immature birds that spend several years at sea, so the old fashioned method of binoculars and a notebook still has value.

As a contrast to the sparse wildlife in the open waters we have also been lucky enough to pass through the Magellan Straits from Punta Arenas where we have been treated to views of Sei and Humpback Whales, Orcas, many fur seals and sea lions and large flocks of birds, with over three hundred Black-browed Albatross together in one area. A non-marine bonus was six Andean Condors soaring over the mountains.

Wildlife encountered during CUSTARD research expedition in the Southern Ocean