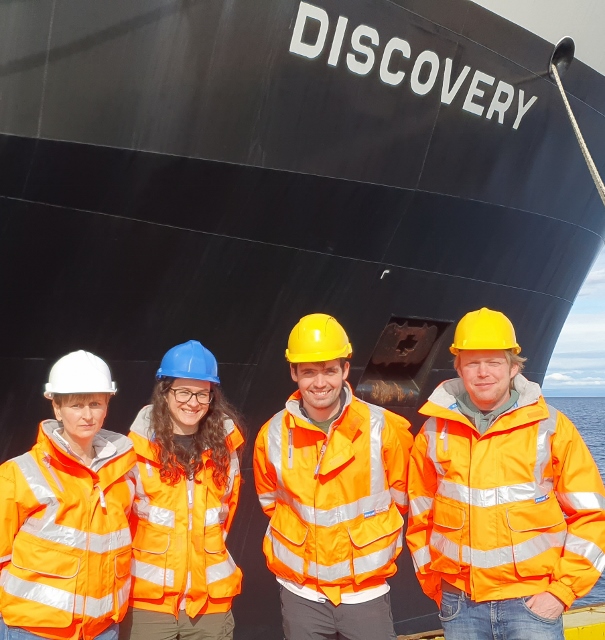 Trace metal team and their role in Custard

Why do we care about trace metals? As the name implies trace metals are the elements with vanishingly low concentrations in seawater. We could make the mistake of thinking that because such little amounts of these elements are found in the ocean that they are not important, but in fact, many have key roles in the most important metabolic ‘chemical machinery’ of phytoplankton. A prime example is their vital part in the photosynthesis process that allows light to be harvested and stored as chemical energy in the surface ocean. On this cruise we are most interested in iron and manganese as these have extremely low concentrations in the surface of the Southern Ocean and can limit the growth of primary producers that support both Southern Ocean and Antarctic ecosystems.

Trace metal measurements in seawater require a very ‘special’ team of scientists from the University of Plymouth, trained in the dark arts of biogeochemistry. We are dedicated to keeping the sampling equipment and laboratories clean and free from contamination. The central job of the team is to collect seawater from the surface down to 5000m depth in a dedicated sampling rosette that holds metal free sampling bottles. In addition, we provide the Custard scientists with trace metal clean surface seawater collected from a pump and hose that is connected to a special ‘fish’ that is towed alongside (but not too close!) the hull of the RRS Discovery.

The trace metal team, and their specific roles, include:

Angie on Particles: Once the sampling bottles are full of seawater they are removed from the rosette and brought inside a clean sampling laboratory, where all the air inside is filtered to prevent contamination.  In here,  Angie filters out the suspended particles (often biological cells and very fine silt) and they are collected onto 0.45 micron filters.

Particles are an important vehicle for transporting trace metals (not just in the ocean, but also in the atmosphere and on land). Just like a car, particles can transport trace metals to a different part of the ocean; either as a passenger inside biological cells / lithogenic material, or as free-riders where the metals hop on and off the outside of particles.  In the Southern Ocean, where the amount of trace metals is extremely low, understanding this particle transport network is crucial to understanding how phytoplankton can grow and thrive.  The number of particles in the Southern Ocean are also low, particularly in the deep ocean. To be able to collect enough to analyse requires filtering lots of seawater (up to 9 L) and this can take a long time (several hours). To keep awake requires loud music and chocolate.

Simon on ultrafiltration: Though we filter out all the particles larger than 0.45 microns (less than a thousandth of a millimetre) this still leaves very fine particles called ‘colloids’. To separate these colloids and elements that are truly dissolved (i.e. when you dissolve table salt in water), Simon has a 12 line ‘ultra’ filtration system that removes all colloids down to 20 nanometres of size! This is so small only molecules will pass through it to be analysed. The only problem with this method is it takes ages and Simon has been known to dose off during this procedure.

Antony on Analysis: The concentration of iron in seawater is around 0.000000028 grams per liter. To measure such little amounts of iron, we need a highly sensitive technique. At the University of Plymouth, we use a system called flow injection with chemiluminescence detection. It works in a very similar way to how fireflies and glow worms light up at night. The ‘flow injection’ part describes how the reagents are pumped through very narrow tubes, and the sample is injected into the flow of reagents by a series of valves.

The injection creates a light signal, the ‘chemiluminescence’, that we can measure. This particular chemiluminescence emits blue light. The more iron in the sample, the more light we measure. Part of Antony’s role on the ship is to analyse the samples that we collect. We use this information to improve where and when we sample, and hopefully find interesting features in the iron concentrations deep in the ocean that we didn’t expect to see.

Izzy on siderophores: Trace metals are important for the growth of tiny microbes (bacteria) in the ocean. Bacteria play an important role in recycling carbon and other elements from the organic matter produced by phytoplankton. In order to survive on low iron concentrations, they have developed a specific way of transporting iron into their cells. They produce ‘ligands’ (compounds which binds to a metal) called siderophores. These siderophores bind iron from the water column and transports it across bacteria cell membranes for growth. Around 99% of all iron in the oceans is thought to be bound to some form of ligand of unknown origin, and many scientists are working to try and figure out what makes up this ‘ligand soup’.

During experiments carried out in the Southern Ocean previously, it was noted that when iron was added to the seawater, the concentration of ligands also increased. This lead to scientists theorising that these ligands are biologically produced, and at least a portion could be siderophores.

Understanding what makes up these ligands is really important, as it helps improve the accuracy of climate models which are used to predict changes to the ocean and atmosphere under future climate change scenarios. To sample siderophores from the water column, unfiltered seawater is collected from the bottles in the clean laboratory. This is then filtered through a 0.2 micron filter to catch any large particles and collect bacterial cells, before passing over a special column which extracts organic compounds from solution. These are both then frozen for future analysis back in Plymouth. This whole process takes about 4 hours in total, but luckily Izzy does not have to stay in the clean sampling laboratory to do this filtering (where there are no windows!) as things tend to get a little weird in there…

Photo: on the left: The Plymouth Trace Metal Team with visitor, Jo Ainsworth (NOC), in the trace clean sampling laboratory.