We finished sampling along the zero meridian transect. Irregular working and sleep hours were rewarded by the stunning track through the sea ice towards Neumayer III Research Station. The frequency at which we lowered CTDs into the water became lower and I found more time to roam around on deck, spotting the occasional seal or penguin. And yes, also Emperors! The ice-groups could finally take their samples on the ice floes. 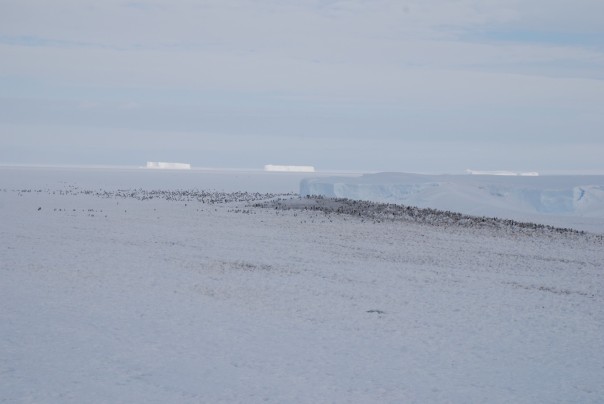 One morning, I rolled out of bed (curtains still drawn because my room mates were sleeping), had breakfast, and made my way to the bridge to record the ice-observations within my time slot. I trotted up the last few steps and was blinded (literally, at first) by the sight of a bright white wall of ice. We had reached a coastal polynya, tranquilly shimmering against the Antarctic ice shelf. Ecstatic, I rushed up to the top deck with my camera. We were so close that we could see the various layers of ice and beautiful icicles dripping down the overhangs. Yes, ice is white. But there are many, many shades of white in Antarctica. They range from grey-ish, almost black under certain light conditions, to blinding incandescent whiteness that hurts your eyes if you don’t wear sunglasses. Then you’ve also got the blue ice, which has an entire range of shades of its own. Sometimes you can only notice a vague blue-ish hue, but my favourite is the intense, and at the same time deeply profound, “fresh” blue that is often hidden right beneath the water’s surface of ice floes or inside a crevasse in the ice shelf.

Ice flow in the Weddell Sea.

(By the way, I just realised that this blog will not contain a lot of PICCOLO science… I apologise. We’ve been taking oxygen and DIC/TA samples at CTD stations. Float deployments have been paused while we’re in the vast sea ice. Of course there’s ice stations and under-ice stations going on, which is making me want to find an excuse to take ice samples. ) 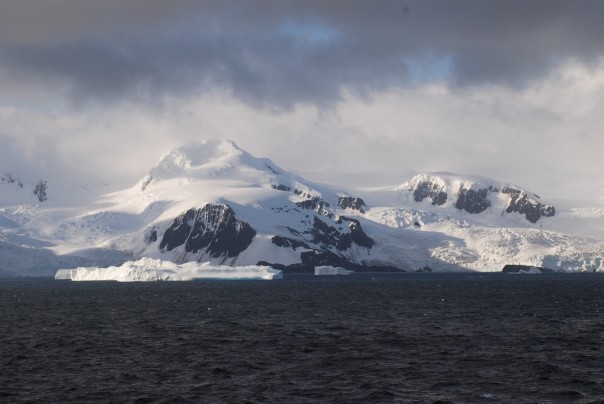 Polarstern was parked along the shelf ice, which towered about 10 m above the water. Besides Neumayer III that was barely visible in the distance, there was just the flat, vast expanse of shades of white. Antarctica. It only took a quick lunch break, before an army of Pistenbullies and skidoos had suddenly materialised along the edge of the ice shelf. In the next two days, new supplies for Neumayer would be unloaded from the ship onto the shelf, and everything that Neumayer wanted to get rid of would be stored on the ship. An impressive operation involving all crew members and scientists.

Regardless of the busy schedules, it was arranged that we could still visit the research station. It’s a rather bumpy 1.5 hour trip in a sled pulled by a Pistenbully. It was a period of time when we all wished that we had more pillowed bottoms, but the visit was absolutely worth every bruise. The current inhabitants of Neumayer showed us around and it is impressive: it is built on poles that stick into the shelf ice. The height of these poles are frequently readjusted to keep the station stable. And on top of all of this excitement, we went to see the Emperor penguin colony, which consisted mostly of chicks who were waiting for their parents to return with food.

Right before continuing on our journey through the Weddell Sea, we drank gluhwein on the ice shelf and played football: Polarstern against Neumayer. What followed was the most epic good bye that I’ve experienced: as the ship pushed itself away from the edge of Antarctica, we waved at the people from Neumayer, swaying along with “It’s time to say goodbye …” until they were out of sight and swallowed by all 50 shades of white. 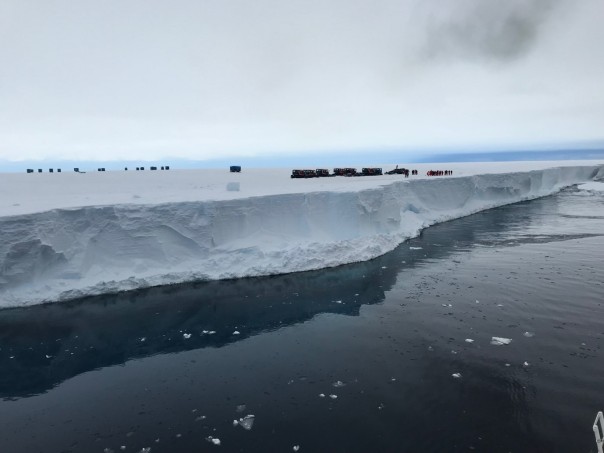 Inhabitants of Neumayer waving goodbye as we leave the ice shelf.

← Blog: “It’s like the Caribbean, but with ice bergs”
Vacancy: Senior Research Associate in Ocean Biogeochemistry →