As the first snow fell yesterday, we received the news that the ship had declared a medical emergency on board. We’re too far south to go back to Cape Town, so instead Polarstern is re-directed straight towards Novo, a Russian station in Antarctica, from where our patient can be flown to South Africa. We are currently moving at full speed, a sight and experience that is quite remarkable.

It’ll take us three days to get there (we’re now one day in) and all science activities (except for the underway sea water analyses) have been paused.

This gave us some thinking time about how to proceed after having reached Novo. As we’re losing almost a week in terms of time, our sampling activities had to be rearranged somewhat. All team leaders being understanding of each other’s research priorities, only a couple of iterations were necessary and our chief scientist re-designed our course of action. After Novo, we will return to the zero meridian transect, but we will stop at less stations so that we will still have enough time in the Weddell Sea.

Today, as I was standing on deck and temperatures outside dropped to just below freezing, I realised how fast we were suddenly approaching the icy continent. We’ve just passed 60 degrees south and I’ve seen my first ice berg! 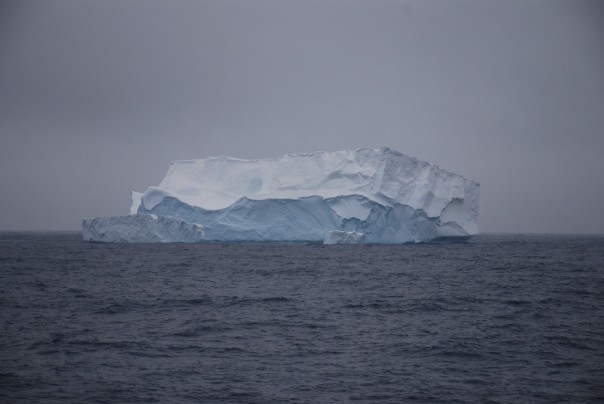 The first one was very far in the distance, but a few hours later I barely allowed myself to grab a coat as I saw another one right outside my window and speed-walked (no running allowed…) to the deck. But that’s not all. A group of humpback whales decided to grace us with their presence. I thought I had missed them, but when I turned to look to the mass of water where the Polarstern is racing to, I could most definitely spot them. A plume of water droplets, a fin and a back, and they were gone.