Three days into the PS117 expedition and I’ve finally managed to find some time to start this blog! I’ve just come from the Zimmertal, which may have helped the inspiration along. For those who haven’t sailed on the RV Polarstern before, Zimmertal (a German word, the meaning of which I’ve been unable to find) is an evening at the bar with volunteers as bar tenders, music, and very, very invitingly priced drinks. It becomes challenging to convince people back home that actual work gets done on a ship with a gym, swimming pool, library, and bar, but perhaps if I stop mentioning those and focus on the science I might succeed.

Sunke (MSc student at Southampton University), Paul (PhD student at Scripps and representing SOCCOM), and I (PhD student at the University of East Anglia and representing the PICCOLO project on the ship) will be working closely together during this cruise. We have been released by our supervisors to run our work in their complete absence, using equipment we’ve never seen before, on a ship, in the middle of the ocean. And, it’s exciting!

So far things seem to be going well for us. 1) The biogeochemical Argo floats have passed the rigorous testing on the helideck of the ship docked at the port of Cape Town, in the sunshine, with Table Mountain looming in the background. 2) Sunke and I have taken our first oxygen and dissolved inorganic carbon/alkalinity samples today and Sunke has also analysed the first oxygen samples. Even though we’re still getting used to the procedures, we’re pretty chuffed with the progress.

Sampling for the first time from the CTD was as stressful as I had imagined, especially with the high water demand for some depths. The contrast is laughable between Sharyn, who moves through the movements – including opening a terribly fiddly tap – all with just one hand and the elegance of a gazelle, while I become a hazard as soon as I open the Niskin bottle. Anyone within a radius of 2 metres runs the risk of getting their face squirted with seawater retrieved from a depth of 5000 metres.

(For those of you reading this and are unfamiliar with the CTD: it stands for “conductivity, temperature, and depth” as it is a device that measures these parameters when it is lowered into the ocean by a winch. Also mounted on it are 24 bottles that close at different depths and thereby collect water samples. Once back on deck, we each sub-sample from these bottles for our own analyses and experiments.) 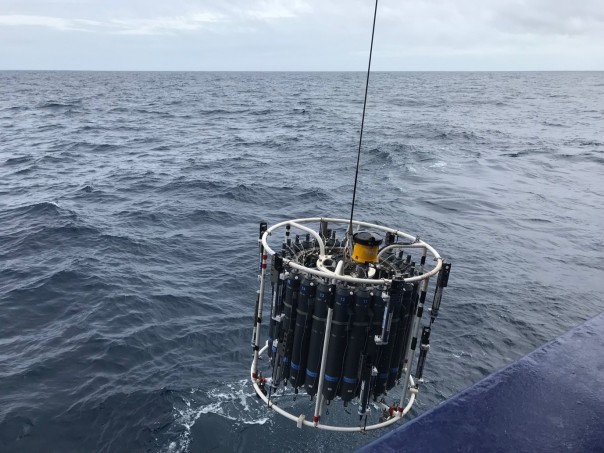 One of the first CTDs from the Alfred-Wegener Institute (leading this expedition) being hauled out of the water after reaching a depth of 5000m.

It’s incredibly interesting to learn about what other research groups on the ship are doing, most of which is so far outside of my own field that I would barely come into touch with it otherwise. On a research ship, you get to see how various groups set up their labs in the most creative ways. For example, we share a lab with a group working on microplastics, and a mosquito net seems to be an important part of their set-up. Besides keeping Antarctic mosquitos (?) away from their important science, it apparently reduces microplastic contamination by an amazing 80%! However, when a pair of tights turned up among our equipment, I felt like the mosquito net hanging in the lab was perhaps not the craziest thing. Besides keeping my legs warm as temperatures drop, the nylon tights are great to put the HPLC filters in, before dunking it all into liquid nitrogen (my legs not included). The nylon does not become brittle in the extreme coldness of the liquid nitrogen, in which the filters are stored for later analysis of chlorophyll.

The next days will be interesting, as our luck with the great weather conditions may run out!

Testing the two biogeochemical SeaBird Navis floats on the RV Polarstern at Cape Town, with Table Mountain in the background.